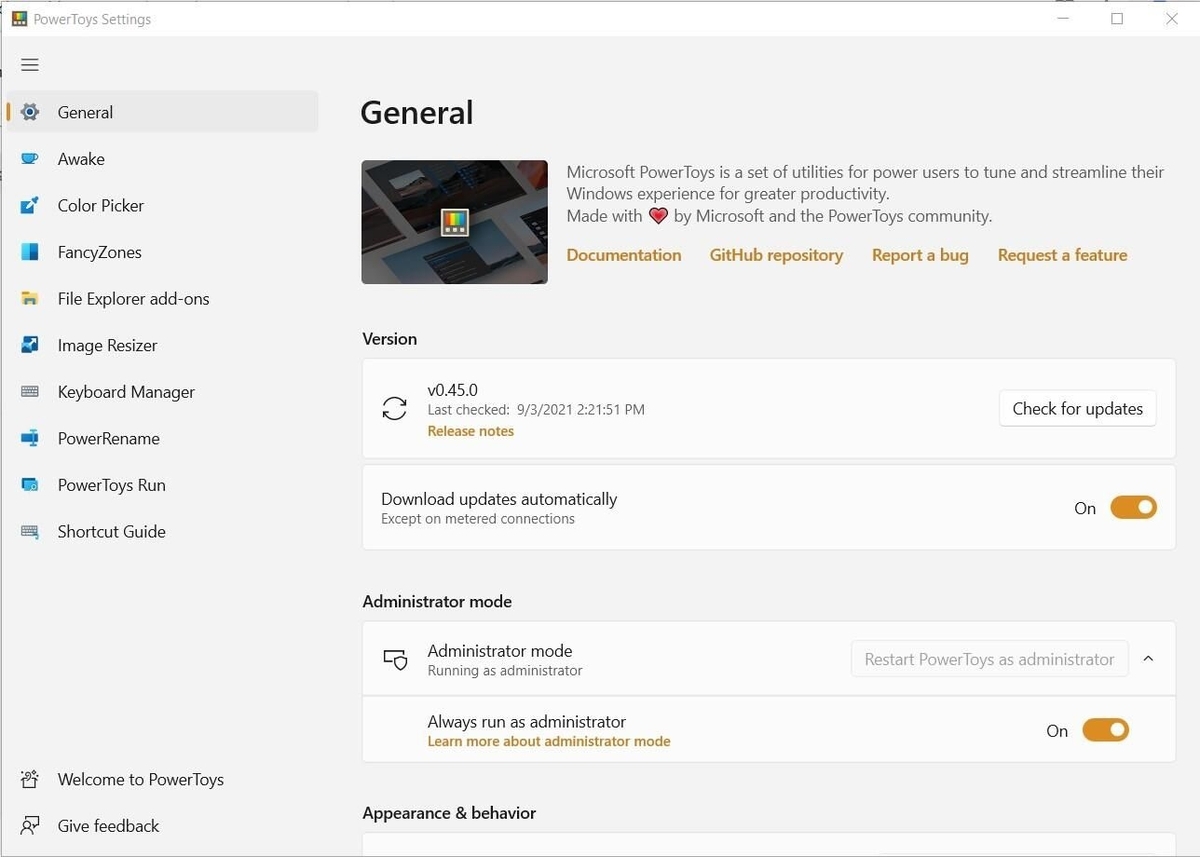 No matter how many features Microsoft crams into its Windows 10 operating system, there will always be users looking for a faster, better or — at the very least — different way of doing things. The iteration of an operating system, no matter how well it works, is just part of human nature, and it cannot be suppressed. So, why not embrace it?

Microsoft’s acknowledgment of this force of human nature is the Windows PowerToys download. (With the general release of Microsoft Windows 11, developers are now referring to this project as Windows PowerToys rather than Windows 10 PowerToys.) A set of slightly unusual free Windows tools has been a part of the Windows operating system landscape since Windows 95, but their availability was noticeably absent for Windows 10 and Windows 11 — at least until September 2019.

In 2019, Microsoft partnered with Janea Systems and released the first two PowerToys for Windows 10, accompanied by a promise of more releases in the near future. This TechRepublic cheat sheet describes each available tool or feature provided by Microsoft’s official Windows PowerToys and describes what each system utility can do.

When was Windows PowerToys first made available?

From the beginning, PowerToys were designed for “power users” who were seeking ways to tweak how the operating system functions. In some cases, inexperienced users were able to make a careless change while using a PowerToys utility, which could wreak havoc within the Windows operating system; as such, novice users have often been encouraged to use caution.

For the most part, though, PowerToys have allowed users — whether they considered themselves power users or not — to more easily make tweaks to the look and feel of Windows without a deep dive into configuration screens or the dreaded and dangerous edit of the Windows Registry file.

Even in the earliest iterations of PowerToys, Microsoft offered users many valuable functionalities. Windows 95 PowerToys included the following:

How can I get Windows PowerToys?

Traditionally, each of the Windows PowerToys has been offered as a separate executable file, available as a free download from a specific Microsoft website.

For Windows 10 and Windows 11, Microsoft has taken a slightly different approach. All Windows 10 PowerToys are now included as part of a free downloadable system that users can configure. Figure A shows you what the Windows PowerToys system looks like.

These PowerToys are currently available:

SEE: All of TechRepublic’s cheat sheets and smart person’s guides

What can Windows PowerToys do?

Here is a list of available Windows PowerToys with a brief description of what each toy does:

FancyZones allows users to manage where and how each separate application window that is open on a Windows desktop will display.

The Windows key Shortcut Guide displays all of the available keyboard shortcuts for the current Windows desktop (Figure C). This PowerToy is activated by holding the Windows key down for the length of time specified in the tool’s configuration settings. The default is 900ms.

With this feature, users don’t have to remember so many Windows key-related shortcut combinations.

The PowerRename Windows PowerToy provides users with advanced tools for bulk renaming of files. The toy extends the Windows Shell Context Menu to add an entry for PowerRename to File Explorer (Figure D).

With PowerRename enabled, simple search and replace or more powerful regular expression matching are added to your toolset for the bulk renaming process. A preview area is displayed as you perform search and replace procedures so users can see how file names will change before initiating the action.

This Windows PowerToy expands on the Preview Pane feature already available in the standard File Explorer application by adding additional file types. Preview Pane allows users to preview the contents of a file after clicking it in File Explorer without actually opening the file (Figure E).

The Image Resizer Windows PowerToy adds more functionality to File Explorer by allowing users to apply bulk image resizing. Users can select images in File Explorer and then select the new Resize Pictures item on the context menu (Figure F), revealed with a right-click on any image.

The Windows Walker Windows PowerToy is designed to be an alternative to the standard Alt-Tab feature in Windows 10 and Windows 11. Users press the CTRL-Windows key combination instead of Alt-Tab to pull up a search box (Figure G). The user then enters keywords into the search box to narrow down the currently open apps and screens on their desktop.

PowerToys Run acts as a quick launcher in Windows. It is another extension of the ALT-Tab concept and taps into the Windows file indexing system. To activate the tool, use the keyboard combination ALT-Space and start typing the name of your desired application (Figure H).

PowerToys Run will search the system and start listing possible applications based on your search phrase. When the application you desire appears, click or tap to run.

Color Picker was contributed to the Windows PowerToys project by Martin Chrzan. The utility allows you to identify any color on your screen by either its HEX or RGB code and then save that information to the Windows clipboard for later use (Figure J). It is a simple tool, but it can save time and prevent frustration for developers and content creators working on color design.

As a number of organizations shifted to remote work structures during the COVID-19 pandemic, many of us now rely on video teleconferencing for work and school interactions and collaboration. The Video Conference Mute tool in Windows PowerToys (Figure K) allows you to mute the audio and video on your PC with a single key combination.

You may mute both audio and video at the same time or independently. The same key combination will toggle the audio and video back to the on position. The Video Conference Mute tool works regardless of what app you are using or what app is currently in the foreground.

The Windows PowerToys tool Awake was contributed to the PowerToys project by the community with attribution given to Den Delimarsky. Awake allows users to keep their computer awake on-demand without having to manage its power settings. The simple configuration screen for Awake is shown in Figure L.

Mouse utilities was contributed to the Windows PowerToys project by Raymond Chen. Mouse utilities is a collection of features that enhance the mouse and cursor functionality on Windows systems.

With two consecutive presses of the Left CTRL key, Find My Mouse will locate your mouse cursor and highlight its current position with a halo (Figure M). Pressing the Esc key will dismiss the highlight. The Find My Mouse feature is useful for presentations on large displays when you want to draw the audience’s attention to a specific area of the screen.

Always on Top allows users to designate the application window currently in focus as “always on top” with a keyboard shortcut toggle (Figure N).

Regardless of what commands, mouse clicks or other inputs are made from that point on, the designated window will remain at the forefront, superseding any other open windows until Always on Top is toggled off. The default keyboard shortcut for the Always on Top toggle is Windows Key + CTRL + T.

The Windows PowerToys utility, Screen Ruler, shown in Figure O, is a quick and easy way to measure the pixels represented on your display screen. The tool is perfect for determining the pixel size of a potential screen capture or for lining up objects in a document.

The Windows PowerToys utility, Text Extractor, shown in Figure Q, is a convenient way to copy text from anywhere on your screen. This code is based on Joe Finney’s Text Grab. Text Extractor uses optical character recognition to read the text on the screen, so it may require editing or proofreading.

The Windows PowerToys utility, File Locksmith, shown in Figure R, is a Windows shell extension for checking what files are in use and by which processes. After installing, right-click on one or more selected files in File Explorer, and then select “What’s using this file?” from the context menu.

The Window PowerToys utility, Hosts File Editor, shown in Figure S, is a quick and simple utility for editing a local hosts file. Note, the application will only work if a hosts file exists.

New Windows PowerToys are periodically added to the Windows library to address new user expectations and requirements. As new PowerToys are released, this list of available tools will be updated to reflect that expansion.

Why are Windows PowerToys important?

Windows PowerToys provide tools and features that can make users of the Windows operating system more productive and, by extension, happier. Over the years, many users have come to depend on one or more of these PowerToys for their daily computer productivity. For many power users, PowerToys improve their quality of work and life.

Beyond making users more productive, PowerToys have also provided a glimpse into what features and tools could (and should) become an integral part of the Windows operating system in the future. Many of these once-separate tools have become just another part of the operating system during its next iteration.

Read next: Get Microsoft Office for Windows and learn how to use it (TechRepublic)

Editor’s note: This article was updated to reflect the latest version of Windows PowerToys.

No matter how many features Microsoft crams into its Windows 10 operating system, there will always be users looking for a faster, better or — at the very least — different way of doing things. The iteration of an operating system, no matter how well it works, is just part of human nature, and it…