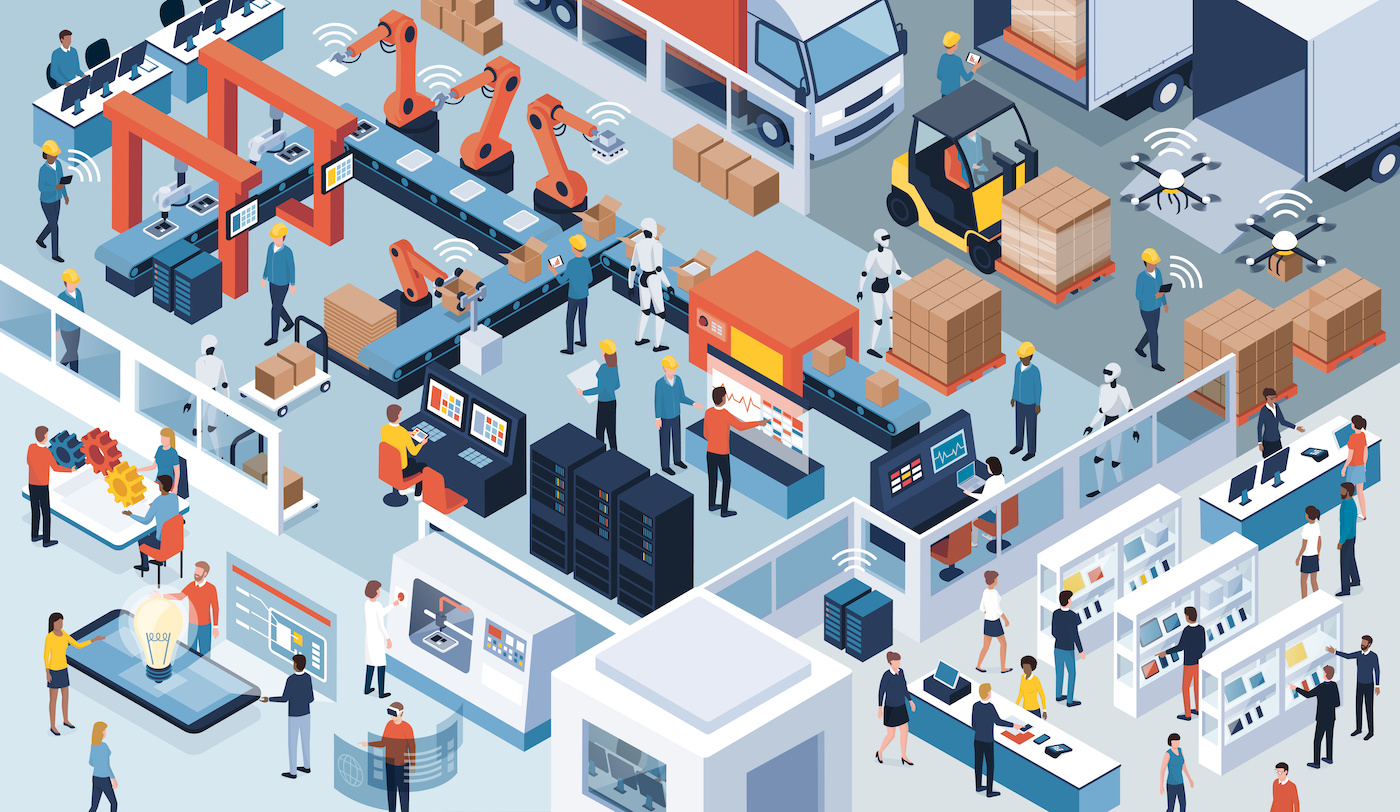 For some IoT organizations, the route forward looks like ambient computing. Some refer to it as the next stage in IoT’s evolution, and some as a way to “put the IoT to work.”

Just as cables may steadily disappear from consumer devices in favor of wearables, IoT for retail may become increasingly invisible as the devices are hidden away in the experience of using the data they produce. One forward-looking startup in this area is Wiliot, a Qualcomm- and Amazon-backed company creating single-use tags for inventory tracking.

Wiliot Chief Marketing Officer Steve Statler echoed several attendees at the NRF 2023 retail conference in New York City this week when he said that the evolution of the IoT is about the experience of the user more than a revolution in the device hardware. Their tags are relatively small, simple chips that run on passive RF energy and Bluetooth. The part that makes the most difference to businesses who might use this, Statler said, is the cloud.

In particular, it offers new use cases for an old technology — radio. Wiliot’s IoT Pixel is a small chip on a tag attached to a paper sticker that itself can be adhered to a product. In particular, Statler suggests it would be useful for products that require strict temperature control, such as vaccines or certain foods.

Temperature sensing is done in the cloud, not on the chip. Instead of a MEMS chip, there is a small antenna. The data from the tag is then stored in the cloud. The tags don’t have batteries, relying instead on energy harvesting that allows them to slowly build up reserves of energy from the radio waves in the air over time. Unlike the more commonly known ​​UHF RFID, it doesn’t require a proprietary scanner and doesn’t broadcast only when prompted. Instead, it continuously broadcasts to a Bluetooth device and is interpreted through the Wiliot cloud.

“We leak hardly any energy,” Statler said. “When you harvest the energy you still have a problem: You don’t have much energy. We developed wave computing, which allows you to take a wave of energy and instead of using it to do all the computing required you do it in little chunks.”

Retailers can use the IoT Pixel tags to track products from point of origin to store. They would be able to tell, for example, whether a piece of fruit had been frozen multiple times over the course of a journey up the East Coast.

In terms of privacy, Wiliot also provides end-to-end encryption. The retailer owns the tag and can set different policies for the ownership of the data moving from chip to cloud.

“If we were sending data to the chip, it wouldn’t be secure, and it would be expensive and difficult to make these changes,” Statler said. “In the cloud, we can make all sorts of changes.”

Wiliot’s cloud service associated with the tags is also an example of the so-called “headless” software layer. Data flows from the device to Wiliot’s cloud to a customer inventory system, meaning the customer can continue using whichever software they prefer.

“It’s all about getting real-time automated visibility of the supply chain,” Statler said.

Processing can now be distributed between chips, edge devices and the cloud, but standardizing how that distributed processing works and which products work together is still a work in progress, Statler said.

Wiliot has taken part in the development of future ambient computing and IoT standards that will govern and set industry-wide norms. They expect to announce the formation of a new ambient computing association soon, which will include large customers and vendors.

Several different standards bodies have IoT governance in place too. IEEE and Bluetooth are both taking a look, and 3GPP is expected to add ambient IoT standards to its next publication, release 19.

Statler says Wiliot sometimes feels like “a minnow among whales” in terms of working alongside larger organizations, but that they have a valuable perspective because they’re working with the technology end-to-end and providing the perspective of customers looking to try something new.

Ambient IoT may be relatively young, but companies like Apple and Qualcomm are contributing to the standards considerations along with startups like Wiliot.

One of the common refrains at NRF was that stores want to avoid customer disappointment that stems from items appearing on the shelf on the store’s website but not in fact being available for pickup. Solutions vary, but more precise tracking and faster data — though not necessarily always real-time for all organizations — are key to the approach.

“It’s all about getting real time automated visibility of the supply chain,” Statler said.

Looking farther into the future, Statler anticipates being able to transform the supply chain into a “demand chain.” IoT devices could gather demand signals from a store or from home using a smart pantry or fridge and automatically order more.

Sustainability via a smart wardrobe

Many tech organizations at NRF spoke about reducing environmental impact without reducing either inventory or demand.

Statler approaches this from two angles. One, as covered above, involves hooking retail closer to customers to get more efficient insights about when and what they need to buy. A solution to the fast fashion problem, for example, might be a smart wardrobe that analyzes which items of clothing a consumer does and doesn’t use and suggests better quality items they will use more often.

The second sustainability angle he points out is that ambient IoT could be used to measure carbon use from the beginning to the end of the supply chain. Carbon accounting is becoming more and more important at the executive level. A tag like Wiliot’s could be used to deliver a “carbon dashboard” at an end-of-year meeting that shows the total carbon cost of the organization’s transportation footprint.

Meanwhile, Wiliot received $30 million in funding in 2019 when it first announced its product. In 2021, that number jumped to $200 million in a funding round backed by SoftBank.

“We have an opportunity to fight some of the biggest problems in the world — climate change, supply chain inefficiency and dysfunction.” Statler said. “Maybe we can save the retail industry if we can allow a better shopping experience to be delivered.”

Meanwhile, IoT is only growing. Matter interoperability was at the top of mind for Amazon’s IoT division at CES 2023, and home assistants and retail chatbots are part of the sometimes murky border between IoT and ambient computing.

Image: elenabsl/TechRepbulic For some IoT organizations, the route forward looks like ambient computing. Some refer to it as the next stage in IoT’s evolution, and some as a way to “put the IoT to work.” Just as cables may steadily disappear from consumer devices in favor of wearables, IoT for retail may become increasingly invisible…

Make 2023 The Year You Learn Python